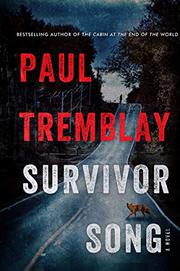 When a virulent and potent form of rabies upends life as we know it in Massachusetts, a pregnant woman and her pediatrician must fight for survival.

Tremblay reached rare new highs in the horror genre with the superbly creepy novel The Cabin at the End of the World (2018) and the Twilight Zone–esque story collection Growing Things (2019). Now, in the midst of a real-life health crisis, Tremblay delivers an eerily prophetic story about a mass outbreak of a rage-inducing virus and the havoc that ensues—basically, he's gone full-on Stephen King by way of 28 Days Later. The story opens in a small, woodsy community south of Boston where what seemed like a relatively mild rabies problem has jumped to humans, who are driven to violent rages and overtaken by a compulsion to bite as many other victims as possible to spread the disease before they eventually succumb and die within a short time. One of our protagonists is Natalie, a very pregnant woman whose husband is violently murdered by one of the outbreak victims right before her eyes. Desperate, bitten, and infected herself while also in shock, she reaches out to her pediatrician, Dr. Ramola “Rams” Sherman, to help her get a dose of the rabies vaccine before she has the baby or succumbs to the illness. Now it’s a race against time to save Natalie and the baby, all while communities are being ravaged by violence. Meanwhile, the outbreak is exacerbated by “a myopic, sluggish federal bureaucracy further hamstrung by a president unwilling and woefully unequipped to make the rational, science-based decisions necessary.” Encounters with well-meaning strangers and near-death escapes are punctuated by Natalie’s sweet recorded messages to her unborn child. A cinematic scope, scenarios grounded in the real world, and a breathless pace make this thriller one of the must-read titles of the summer.