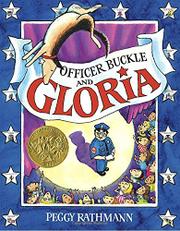 The unexpected theme of this picture book featuring a policeman and his dog is jealousy over attention; it has definite child appeal.

Officer Buckle likes to share safety tips with children, but he is so boring he puts the audience to sleep. Then he takes along the police department's new dog, Gloria, to share the stage. She does tricks, such as jumping up with all her hair standing on end as he talks about avoiding electric shock, and Officer Buckle is a hit. He doesn't realize until later that his new popularity is based on Gloria's antics. He stops lecturing and sulks, relenting only when the children write to him to say that Gloria won't perform without him.The book is quite funny, thanks to Rathmann's frenetic cartoons. The text is very direct; Gloria's performances only show up in the pictures, and the contrast is hilarious. The idea of an adult's envying a dog is amusing, and the emotions portrayed will hit home with children.

Fans of Rathmann's Good Night, Gorilla (1994) will like this one, too.