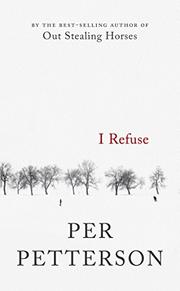 by Per Petterson ; translated by Don Bartlett

Norwegian Petterson (It’s Fine By Me, 2012, etc.) shows his considerable gift for exploring the darker crevices of boyhood in this elegiac story of two long-estranged friends whose lives have not turned out as they expected.

In 2006, Tommy and Jim speak briefly on a bridge in Oslo where Jim is fishing and Tommy is driving his Mercedes. While Tommy is a successful if lonely businessman, emotionally fragile Jim has not worked at his job at the Oslo Libraries for a year, and his sick leave has run out. More than 30 years ago, the two were best friends growing up together in the working-class neighborhood of Mørk. Back then, Jim—raised by his devoted single mom, who taught religion and instilled in Jim the belief that “you had to make yourself worthy”—seemed headed for success. Tommy’s childhood was a disaster—after his mother’s disappearance in 1964, his father abused his three younger sisters until 13-year-old Tommy attacked him with a bat and his father disappeared, too. The children were sent to different homes. While living with kindly neighbor Jonsen, Tommy tried to maintain a bond with his sister Siri, although her heavily Christian new parents considered him a bad influence. In adolescence, Siri was no longer close to Tommy but began a romance with Jim when he started attending her high school. The triangular connections became complicated, but all three had a sweetness and innocence about them. Then one afternoon Jim had a moment of what he considered cowardice while skating with Tommy and never forgave himself. Going about what turns into a trying day for each in 2006, both middle-aged men are drawn back to memories of that earlier time and each other, exposing how the scars from their (and Siri’s) pasts formed them. Don’t expect redemption here, but hope for connection.

Without pyrotechnics, Petterson brings his characters and working-class Norway vividly, even passionately, to life; days after they finish the novel, readers may still have dreams of ice cracking.