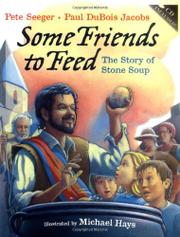 SOME FRIENDS TO FEED

The Story of Stone Soup

Not as satisfying in word or illustration as the classic French Stone Soup by Marcia Brown or the Swedish Nail Soup by Margot and Harve Zemach, the lyrics included distinguish this retelling from others. Set in Germany, a single soldier tricks a town full of people into supplying the ingredients for a tasty soup. Trickery is downplayed but as each ingredient is added, the children announce the addition with a burst of song. Hays’s acrylic illustrations on canvas are realistic but relatively static in their depiction of the villagers and the action. Although lacking in the richness of earlier retellings, this version, with music, will have its fans. This will be a marginal purchase for all but the largest of libraries. (includes CD) (Folktale. 4-8)