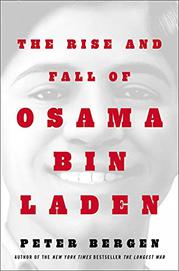 THE RISE AND FALL OF OSAMA BIN LADEN

Osama bin Laden, whom the author interviewed long before he became a household name, was an enigmatic and contradictory man: He was rich but insisted on living ascetically—a fact that drove a son of his away in adulthood—and though he had the bearing of a quiet cleric, he engineered the deaths of countless thousands of people, and not just on 9/11. Bergen resists psychobiography while examining some of the facts of his family life that shaped his personality. He barely knew his father, whom his mother had divorced, and he idealized a remote, dusty corner of Yemen, his family seat, even as it gave birth to an offshoot of Islam that worshipped Christian saints alongside Muslim ones. In the last weeks of his life, bin Laden was consumed with the fear that, hidden away in a compound in Pakistan, he was missing out on what he felt should have been a leadership role in the Arab Spring movement—and never mind that it had little to do with his religious fundamentalism. Throughout, Bergen turns up revealing details and sharp arguments against received wisdom: one moment finds bin Laden treating his white beard with Just for Men hair dye; another introduces readers to one of his wives, a “poet and intellectual who…played a key, hidden role in formulating his ideas and helping him prepare his public statements.” Though intelligence presumes him to have delegated the work to lieutenants, Bergen shows bin Laden micromanaging the 9/11 attacks and subsequent operations as the Bush administration bungled its efforts to find him. Meaningfully, the author notes that waterboarding and other torture of captured al-Qaida operatives yielded almost no actionable intelligence, and he disputes the claim that the Pakistani intelligence service shielded bin Laden from American discovery, discounting what has become the near-official narrative.

Essential for anyone concerned with geopolitics, national security, and the containment of further terrorist actions.