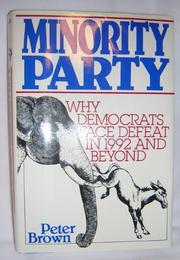 Why Democrats Face Defeat in 1992 and Beyond

Polemic arguing that the Democratic Party is headed for the dustbin of history because the core electorate—the white middle- class—perceives it as dominated by minority concerns. Brown, chief political writer for Scripps Howard News Service, says the Democrats are hiding from an unpleasant truth they've long known: that the white middle-class blames them for the welfare society, for reverse discrimination coming out of affirmative action, and for crime. Furthermore, Brown argues, many whites perceive Democrats as ``cater[ing] to racial minorities, the poor, and the elite liberal whites who [run] the party''—in other words, ``paying for the other guy.'' With a torrent of statistics and opinion-poll results, interviews of politicians, and folksy portraits of a few former Democrats who quit the party in disgust, Brown identifies a tremendous white backlash driven by prejudice, fear, and wounded self-interest and argues that liberal guilt is dead. The working class, he says, has been absorbed into the middle-class; union voting blocks are shrinking; and machine politics don't operate in the suburbs where the white middle-class has moved. Fed reality via a flickering TV screen and rootless after changing suburbs every few years, such white voters—by ``simple math'' the largest voting bloc—buy the Republican message of economic self-interest, Brown argues. If he's right, the Democrats, ignorant of such demographics, will continue to lose the presidency and will soon lose their control of Congress and state and local governments. Brown, far from impartial, will be wide open to charges of promoting the racism he describes. And there's a perversity to his implied thesis that Democrats can't win unless they become even more indistinguishable from Republicans. Moreover, like the GOP, Brown doesn't discuss the S&L debacle, deficits, or any evidence counter to his claim that the GOP serves the economic self-interest of the middle class.