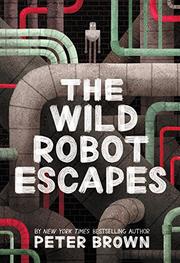 Roz, a robot who learned to adapt to life among wild creatures in her first outing, seeks to return to the island she calls home.

Brown’s sequel to The Wild Robot (2016) continues an intriguing premise: What would happen to a robot after challenges in an unexpected environment cause it to evolve in unusual ways? As this book opens, Roz is delivered to a farm where she helps a widower with two young children run a dairy operation that has been in his family for generations. Roz reveals her backstory to the cows, who are supportive of the robot’s determination to return to the island and to her adopted son, the goose Brightbill. The cows, the children, and finally Brightbill himself come to Roz’s aid. The focus on Roz’s escape from human control results in a somewhat solemn and episodic narrative, with an extended journey and chase after Roz leaves the farm. Dr. Molovo, a literal deus ex machina, appears near the end of the story to provide a means of rescue. She is Roz’s designer/creator, and, intrigued by the robot’s adaptation and evolution but cognizant of the threat that those achievements might represent to humans, she assists Roz and Brightbill in their quest. The satisfactory (if inevitable-feeling) conclusion may prompt discussion about individual agency and determination, whether for robots or people.

If not as effervescent as Roz’s first outing, it is still a provocatively contemplative one.