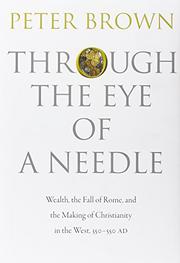 THROUGH THE EYE OF A NEEDLE

Wealth, the Fall of Rome, and the Making of Christianity in the West, 350-550 Ad

Render unto Caesar, quoth the New Testament—even when Caesar is the church that Peter built.

Brown (Poverty and Leadership in the Later Roman Empire, 2002, etc.) may be an emeritus professor of history at Princeton, but his research is resolutely up-to-date. So, too, is his language, as when he writes of a particular trope of the late Roman historian Ammianus, “this was no nostalgia trip on his part,” and when he describes the imposition of the rule of celibacy on the priesthood as “consumer driven.” That last makes particular sense in the context of this sizable book, in which Brown examines the long conflict between Christ-like immiseration and episcopal opulence, a conflict that has its roots in the economic history of the late Roman Empire. In that time, writes the author, there was an uneasy concord between the ruling nobility and the peasantry during a time when barbarian invasions and civil war were the new normal. When the empire dissolved, one way for a wealthy Christian to feel holy was to renounce wealth entirely in the way of the monks; another was to give all his money to the rising church, in which the monks took the place of all the poor outside the walls of the cloister. “Gifts to the city gained fame in this world and this world only,” writes Brown. “By contrast, gifts within the churches were thought to join this world to a boundless world beyond the stars.” Brown charts the growth of the church’s “financial muscle,” venturing intriguing asides as he proceeds on such matters as pagan vestiges within the beliefs of the church and lay society alike—the supernatural connection, for instance, of wealth to the turning of the seasons—and the fact that the ranks of the early Christian church were filled not by the meek and the poor, but instead by “moderately well-to-do townfolk.”

A hefty yet lucid contribution to the history of early Christianity.