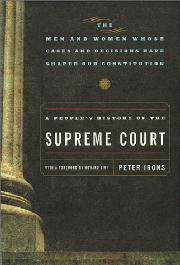 A PEOPLE'S HISTORY OF THE SUPREME COURT

This sweeping history of the Supreme Court will thoroughly aggravate anyone who believes, along with Robert Bork or Justice Antonin Scalia that the Constitution should be read narrowly. Irons (Political Science/Univ. of California, San Diego; May It Please the Court: The First Amendment, 1997, etc.) makes no bones about his ideological stance. To him, the Constitution must be construed in the context of an evolving nation. Not surprisingly, former Justice William Brennan —remains my judicial ideal and inspiration.— Irons is at his best when he focuses on those litigants before the Court who were outsiders seeking empowerment: people like Fred Korematsu, who challenged the evacuation of Japanese-Americans during WWII, or Homer Plessy, who in 1892 had the audacity to ride in a Louisiana railroad car reserved for white passengers. The decision to explain the Supreme Court and its evolving doctrines through the stories of those whose cases generated rulings that subsequently affected every citizen makes the book accessible to nonlawyers who have a general interest in legal history. This may be why the chapters that trace the early years of the court make for slow going: the —little guy— litigants with whom Irons identifies are missing, and instead we are left slogging through rehashed material. Finally, while Irons is unabashed about his viewpoint, this candor does nothing to assure readers new to the subject that they are getting the whole, if partisan, story. Irons has a disquieting habit of using loaded adjectives and verbs when describing the thoughts of those justices with whom he disagrees. Thus, Felix Frankfurter —pontificates— and gives a —civics lecture— in an opinion that Irons views as wrongheaded, and he barely conceals his disdain for justices, like William Rehnquist and Clarence Thomas, on the other side of the ideological debate. Irons is preaching to the choir. While his history contains a few great stories, it will change no minds. (Book-of-the-Month Club selection)