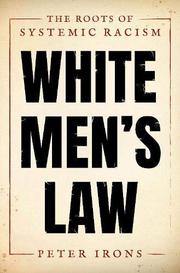 The Roots of Systemic Racism

A constitutional law scholar surveys the formal and informal structures that perpetuated discrimination and violence against African Americans from the Colonial era to the present day.

In the prologue, Irons examines the 1935 lynching of Rubin Stacy—a young Black man whose killers, among them a sheriff, went free despite abundant evidence against them—as a frame for his long-term consideration of systemic racism in the U.S. Subsequent chapters analyze representative examples of racially motivated injustices, key legal and political battles over civil rights, and evolving efforts to identify and combat institutional biases. In the epilogue, Irons offers trenchant reflections on the Trump presidency and its ties to White supremacist ideology as well as the significance of recent cases of police misconduct and the rise of Black Lives Matter. Among the author’s strengths are his skillful use of primary sources, which ground his own commentary in each chapter, and his lucid explanations of the complex dynamics of landmark court cases. The author’s expansive view of American legal history makes it possible for Irons to make striking connections between the discriminatory practices of different eras—as in, for instance, his accounts of the history of efforts to restrict voting rights or enforce racial segregation. The book is most compelling when the author draws out, with the help of other relevant scholarship, some of the most important ways such practices have reverberated both psychologically and socially. In bringing his story to a close, Irons argues persuasively that “the effects of systemic racism” constitute “a continuing national crisis” which can be felt in “education, employment, life expectancy, and access to healthcare.”

A well-organized, revealing outline of the “reign of White Men’s Law” in America and a forceful call for ongoing reform.