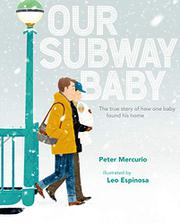 Baby Kevin, initially known as “Danny ACE Doe,” was found in the New York City’s 14th Street subway station, which serves the A-C-E lines, by one of his future fathers, Danny. Kevin’s other father, Pete (author Mercurio), serves as the narrator, explaining how the two men came to add the newborn to their family. Readers are given an abridged version of the story from Danny and Pete’s point of view as they work to formally adopt Kevin and bring him home in time for Christmas. The story excels at highlighting the determination of loving fathers while still including realistic moments of hesitation, doubt, and fear that occur for new and soon-to-be parents. The language is mindful of its audience (for example using “piggy banks” instead of “bank accounts” to discuss finances) while never patronizing young readers. Espinosa’s posterlike artwork—which presents the cleanest New York readers are ever likely to see—extends the text and makes use of unexpected angles to heighten emotional scenes and moments of urgency. The diversity of skin tones, ages, and faces (Danny and Pete both present white, and Kevin has light brown skin) befits the Big Apple. Family snapshots and a closing author’s note emphasize that the most important thing in any family is love. (This book was reviewed digitally with 11.3-by-18-inch double-page spreads viewed at 43% of actual size.)

A delightful story of love and hope.