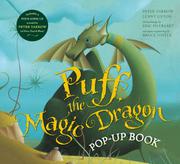 The magic dragon rides again, this time incarnated in a pop-up.

In 2007, this artist and publisher did quite a nice picture book of the lyrics to the song written by Yarrow (of Peter, Paul & Mary) and Lipton. This is pretty much the same version, gussied up a little with pop-ups. Mostly, they take Puybaret’s gentle, smooth-edged, muted greens, browns, and blues and layer them three-dimensionally. Dolphins with mortarboards and gondolier shirts frolic, as do the peopleflies instead of dragonflies. In the end, it is a little girl (perhaps Jackie’s daughter, as he isn’t present) who comes to Honalee to awaken Puff once again to frolic in the autumn mist. A CD with four tunes is included, two of them versions of “Puff” but neither of those the original: One is a much-less-spirited version with Yarrow and his daughter Bethany singing; one is an instrumental. The other two numbers, also on the less-energetic side, are “Froggie Went A-Courtin’ ” and “The Blue Tail Fly.” The latter, although sung by generations of children, does have historical lyrics with ambiguous meanings related to slavery, and one wonders about its inclusion here. While this pop-up version adds little to Puff’s enduring charm, at least it does not distract. (Pop-up/picture book. 3-6)