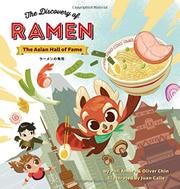 THE DISCOVERY OF RAMEN

From the Asian Hall of Fame series

A time-traveling red panda gives two American schoolkids a tour of the history of ramen.

In this first installment in the Asian Hall of Fame series, Emma, a girl with brown hair and light brown skin, and Ethan, who appears to be Asian, are on a school field trip when they meet Dao for the first time in a ramen-ya, or ramen restaurant. The talking red panda invites them to discover the history behind this delicious noodle dish, and with a bang on Dao’s gong, all three find themselves in 19th-century Japan, where vendors are selling ramen from pushcarts. After World War II, ramen became even more accessible because an abundance of wheat drove the cost of production down. At a ramen factory, they watch how the noodles are made with salt, eggs, and kansui (alkaline water). Then they travel to the 1950s, when Momofuku Ando invented (and popularized) instant ramen, flash-fried noodles with seasonings already added. Today, 100 billion packages of instant ramen are sold annually, but fresh ramen is rising in popularity again, in the United States and all over the world. Calle’s illustrations are undeniably adorable; cute characters and dynamic scenes elevate the sometimes heavy-handed and confusing text, which too often relies on didactic dialogue to provide the fascinating facts and information.