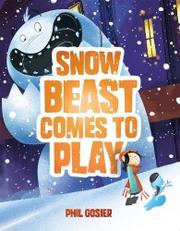 Unfortunately for one disgruntled snow beast, there isn’t a whole lot to do on the mountain aside from snoring or comparing relative foot size (big, bigger, biggest).

Tobogganing all the way down on his prodigious rump, Snow Beast lands in town to start his search for a friend. Snow Beast is as large as a three-story building, and his voice is just as huge. Despite having the conversational skills of a caveman—“SNOW BEAST WANT PLAY!”—Snow Beast appears to know a lot about the rules of friendship, such as always starting with “Hello,” and “to try to join in.” Nevertheless, Snow Beast’s overtures of friendship are rejected by everyone—from the five o’clock shadowed snow-shoveler to the shrieking Christmas-light committee. Penny, a little white girl who loves snow but knows enough to be wary of snow beasts, screeches and runs after his bellowed, “HELLO!!” But when Snow Beast starts crying, Penny, despite her dog’s advice to the contrary, invites the beast to play. And that’s about it, as far as plot is concerned. Gosier’s spare illustrations evoke the animation style of the 1950s. Speech bubbles capture the scant lines of dialogue as well as every screech, shriek, and howl of the terrified townsfolk.

The lack of adventure and the pat, pedestrian resolution makes this an ineffective if well-intentioned appeal to get past the unreliability of first impressions.