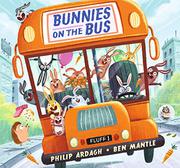 BUNNIES ON THE BUS

Mayhem ensues when bunnies board the bus.

Don’t be fooled by the tranquil-seeming town in the opening scene; look closely and you’ll spy bunny ears. And on the title and copyright spread that follows, those bunnies sneakily take over the city bus behind the back of the regular driver, an elephant. The bunny behind the wheel seems to take the “Am I driving well?” sign on the rear of the bus as a personal challenge. (The answer is no, as many would-be bus riders and pedestrians can attest.) Repetitive phrasing in the rhyming verses adds to the frenzied atmosphere that quickly ensues, the author’s British origins evident in some of the word choices: “Pandas at the crossing! / Pandas at the crossing! / Their shopping jumping in the air, / spinning and a-tossing.” (This likely also accounts for the rhyming of “again” with “train.”) But Mantle’s busy and very funny illustrations will ease any potential confusion among American readers. Children can follow a pig letter carrier, a parent and child sheep going about town, a bear in a bow tie gathering gifts for and then dining with a sweetheart, a pair of masked red-squirrel bandits who are making their getaway after robbing a bank, and many other characters, not to mention the antics of those bunnies on the bus. The ending hints at a possible sequel as the bunnies disembark in favor of a train.

The illustrations alone will keep readers occupied for hours.