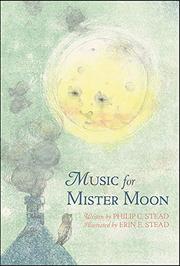 In making amends for a thoughtless act, a shy young cellist finds just the right audience.

So afflicted with performance anxiety that her parents’ mere suggestion that she might play in an orchestra one day makes her flushed and sweaty, Harriet Henry retreats to her room and transforms it into a small, isolated house in which she can practice unheard. But when the teacup she throws through a window to silence an annoying owl knocks the moon down from the sky, Harriet—introducing herself, with a deft bit of gender fluidity, as “Hank”—makes a wagon and responds to the wishes of “Mister Moon” by wheeling him first to the hat maker (a bear) for a warm hat, then down to the lake to listen to water and a distant bell buoy (“There is so much music down below,” he comments. “It is so quiet up in the sky”), then finally back to the sky to play for the moon, who has promised not to cheer or even watch. The illustrations, as spare and harmonious as the prose, are pale constructs of lightly applied pencil over misty ink monoprints featuring a large, gently glowing moon with human features, a comically tiny wagon, and a serious-looking, pigtailed child (white, like her parents) barely if at all taller than her instrument. The ability of Harriet/Hank to remake her surroundings at will not only enhances the episode’s dreamlike quality, but should also strike a chord in retiring or introspective readers.