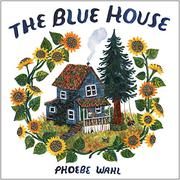 A father and son are forced from their longtime neighborhood.

Leo and his dad love their rented “old blue house” despite its quirks (peeling paint, a mossy roof, leaks and creaks). The house is filled with so many memories that make it theirs. In the winter, the duo make cozy forts and bake pies to warm up when the old heater breaks. They dance to “Spruce Springsteel” on vinyl. As the garden fills with raspberries and tomatoes in the summer, Leo plays in the yard until sundown. But, lately, developers have been building “big, new apartments” nearby. Their landlord informs Leo’s dad that the blue house is next to be torn down. Leo and his dad dance, stomp, and rage together. Will their new home ever feel the same? Wahl’s latest is a moving portrait of a single-parent family’s resilience and love amid redevelopment. The textured, deeply colorful art utilizes collage, and the text appears handwritten, giving the rich spreads the feel of a scrapbook. The detailed illustrations enrich not only the memories, but the characters’ colorful personalities and relationship. The third-person narrative’s tight connection to Leo and his emotions positions the text as Virginia Lee Burton’s The Little House retold for a new generation. Endpapers depict Leo’s neighborhood before and after redevelopment, effectively showing the impact. Both Leo and his dad present White.

An absolute treasure for anyone who has ever moved.