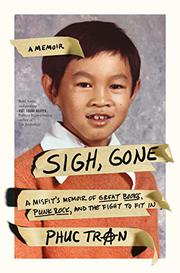 A Misfit's Memoir of Great Books, Punk Rock, and the Fight To Fit In

A high school Latin teacher and tattoo artist’s memoir about immigrating to small-town America from Vietnam and learning to fit in through reading, skateboarding, and punk rock.

Tran and his parents fled Saigon as war refugees in 1975, and they eventually settled in Carlisle, Pennsylvania. There, they became the lone Asians in a town that “offered all the rainbows of Caucasia.” Local children taunted Tran throughout childhood while neighbors and co-workers saw his parents as amusing curiosities or “symbols of a painful and confusing war…of the people who had shot at them and killed their friends, brothers, and sons.” As he neared adolescence, Tran decided that he could solve his problems by trying to “be less Asian.” First, he developed “social Teflon” by earning top grades in all his classes, deciding that he “would take nerd props over no props at all.” He further learned to deemphasize his otherness by joining the skateboarding subculture as a young teen and adopting a punk persona. Even though he was a good student, however, the author sometimes came up short of parental expectations for perfection, with excruciatingly painful results. During his junior year of high school, he stumbled across a guide to classic literary texts touted as “the foundation for being ‘all-American.’ ” Eager to assimilate, Tran immersed himself in works like The Metamorphosis and The Importance of Being Earnest. He became more self-reflective and developed an unexpected passion for books, which he highlights by naming each chapter after a favorite work of literature (Madame Bovary, Pygmalion, etc.). At the suggestion of a history teacher, Tran read The Autobiography of Malcolm X, which heightened his awareness of white racism toward Asians and of the racism he saw in his own father toward blacks. Funny, poignant, and unsparing, Tran’s sharp, sensitive, punk-inflected memoir presents one immigrant’s quest for self-acceptance through the lens of American and European literary classics.