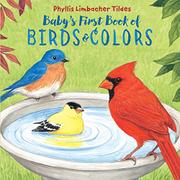 The two birds presented on each spread not only are of similar coloration, but also live in the same North American habitat. A scarlet tanager and a cardinal, both male, perch in a red maple tree; a male Eastern bluebird and a blue jay appear with morning glories and blueberries. The name of each color is printed in large font, while the name of each bird is in a much smaller one. Whether the bird shown is male or female, or if the male and female have similar coloring, is also indicated. The names of the trees they perch upon are identified in a note on the back cover. These details will be lost on most toddlers, but caregivers will appreciate being able to answer questions knowledgeably. Colors featured are from the standard box of crayons, except that pink is substituted for purple. Black and white share a spread. The cover image, of a cardinal, goldfinch, and bluebird in a birdbath, is not nearly as inviting as the images within. The final spread shows children (one white, one black, one Asian) assembling a puzzle that includes the same birds. This may serve as a reprise but will probably be skipped over. Bird-loving readers will probably feel that the space could have been put to better use by giving white birds their own page or adding a purple martin.

Useful for toddling birders in need of board books about colors.