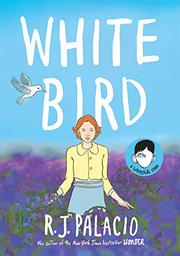 A grandmother shares her story of survival as a Jew in France during World War II.

As part of a homework assignment, Julian (Auggie’s chief tormentor in Wonder, 2012) video chats with Grandmère, who finally relates her wartime story. Born Sara Blum to a comfortable French Jewish family, she is indulged by her parents, who remain in Vichy France after 1940. Then, in 1943, after the German occupation, soldiers come to Sara’s school to arrest her and the other Jewish students. Sara hides and is soon spirited away by “Tourteau,” a student that she and the others had teased because of his crablike, crutch-assisted walk after being stricken by polio. Nonetheless, Tourteau, whose real name is Julien, and his parents shelter Sara in their barn loft for the duration of the war, often at great peril but always with care and love. Palacio begins each part of her story with quotations: from Muriel Rukeyser’s poetry, Anne Frank, and George Santayana. Her digital drawings, inked by Czap, highlight facial close-ups that brilliantly depict emotions. The narrative thread, inspired by Palacio’s mother-in-law, is spellbinding. In the final pages, the titular bird, seen in previous illustrations, soars skyward and connects readers to today’s immigration tragedies. Extensive backmatter, including an afterword by Ruth Franklin, provides superb resources. Although the book is being marketed as middle-grade, the complexities of the Holocaust in Vichy France, the growing relationship between Sara and Julien, Julien’s fate, and the mutual mistrust among neighbors will be most readily appreciated by Wonder’s older graduates.

A must-read graphic novel that is both heart-rending and beautifully hopeful.