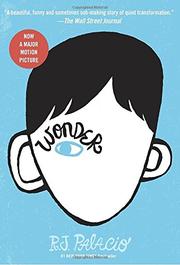 After being home-schooled for years, Auggie Pullman is about to start fifth grade, but he’s worried: How will he fit into middle school life when he looks so different from everyone else?

Auggie has had 27 surgeries to correct facial anomalies he was born with, but he still has a face that has earned him such cruel nicknames as Freak, Freddy Krueger, Gross-out and Lizard face. Though “his features look like they’ve been melted, like the drippings on a candle” and he’s used to people averting their eyes when they see him, he’s an engaging boy who feels pretty ordinary inside. He’s smart, funny, kind and brave, but his father says that having Auggie attend Beecher Prep would be like sending “a lamb to the slaughter.” Palacio divides the novel into eight parts, interspersing Auggie’s first-person narrative with the voices of family members and classmates, wisely expanding the story beyond Auggie’s viewpoint and demonstrating that Auggie’s arrival at school doesn’t test only him, it affects everyone in the community. Auggie may be finding his place in the world, but that world must find a way to make room for him, too.

A memorable story of kindness, courage and wonder.