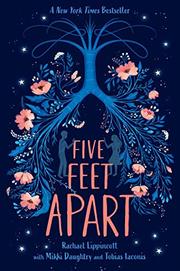 by Rachael Lippincott with Mikki Daughtry with Tobias Iaconis

A hospital is an unlikely place for first love, but for two teenagers with cystic fibrosis who have a history of extended stays, it proves to be a realistic yet difficult backdrop.

Stella is a high school senior who is dedicated to her CF treatments while Will, a talented artist, is home-schooled and anticipating his 18th birthday, when he will be free to make his own medical decisions. Despite rocky first impressions, Stella and Will make a deal—Will must stick to his treatment regimen, and in return, Stella will model for him while he draws her portrait. This leads to romance, but the combination of CF and Will’s infection with B. cepacia requires that he must stay several feet away from Stella, making physical touch an impossibility. Stella eventually understands why living on the edge can be freeing, and Will begins taking his treatment regimen seriously—leading to their only bit of meaningful development. The novel is written in alternating chapters, creating a few unexpected plot developments, but much of it is predictable and forgettable due to thin characterization. All characters are presumed white except for gay, Colombian CF patient Poe, whose story arc fulfills tired stereotypical tropes and who seems to function mostly as a catalyst for Stella’s growth.

The pleasure of the protagonists’ romance notwithstanding, give this one a miss. (Romance. 14-18)