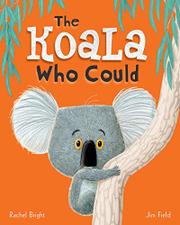 THE KOALA WHO COULD

Feeling safe and comfortable in his tree, Kevin the koala resists the invitation to come down and have fun.

Despite encouragement from a wombat, the roos, and the dingoes, the uncertainty of what might happen below is too much for Kevin to overcome. So he refuses and makes excuses. Later, while watching the others share in a bonfire singalong, he briefly considers joining then rationalizes, “But he knew he’d miss home / …it was dark and SO late. / The whole thing was risky. / Adventure could wait.” Until a woodpecker comes along: “TAP TAPPITY TAP TAP TAP TAP OH NO!” The woodpecker’s destruction creates a break in Kevin’s tree, causing it to come crashing down even as his friends plead with him to “UN-CLING!” and “Leap and we’ll catch you! / Just let yourself go!” Field’s expressive and humorous Australian-animal caricatures vividly extend the nicely paced rhyming narrative’s message. Kevin’s worried, nervous frowns are paralleled with happy, cheering smiles of his Down Under buddies. The climactic scene’s clattering smash, with Kevin’s possessions flying while he clutches, eyes squeezed shut, his branch, brings the story to a sudden thundering pause. The next page shows everyone’s surprised wide-eyed relief and love for Kevin, who has survived his worst fear and will now be willing and able to try new things.

Sure to become a read-aloud favorite.