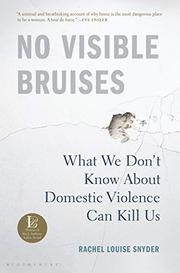 What We Don’t Know About Domestic Violence Can Kill Us

A powerful exploration of the sinister, insidious nature of domestic violence in America.

As an international reporter for more than two decades, Snyder (Literature/American Univ.; What We've Lost Is Nothing, 2014, etc.) encountered regular acts of violence against women adjacent to the issues she covered. The grim statistics about and the prevalence of unreported incidents both startled and motivated her to begin chronicling the universality of an issue that “is too often hidden.” Through a graphically portrayed series of in-depth profiles, the author discusses how domestic violence has reached epidemic levels while efforts to curb the trend have been historically underfunded and ineffective. She elucidates this point in stories spotlighting both victims and assailants alongside the investigators and family members who’ve become all-consumed with sleuthing the crimes that have torn their relationships apart. She also tackles the complex conundrum facing victims of familial violence who choose to remain in abusive households. Intriguingly, Snyder probes the chilling territory of the perpetrators, sketching them from the inside out. Especially memorable is the author’s incisive coverage of the communities responsible for creating change through victim advocacy, rehabilitative jail programs, batterer intervention groups, and transitional housing. In one scene, Snyder describes a state prison’s group therapy session in which former abusers discuss “their own incidents of violence, times they…denied any wrongdoing, moments they manipulated or verbally threatened partners [and] instances of trivializing their own violent events. They begin to see, some of them for the first time ever, the effect their violence may have had on their victims.” As these stories and perspectives evolve and deepen, the author contributes her own profound introspection on the nature of empathy and relatability, weaving in themes of enduring emotional trauma, the resilience of “deep stereotypes,” and the many manifestations of physical and emotional violence.

Bracing and gut-wrenching, with slivers of hope throughout, this is exemplary, moving reportage on an important subject that often remains in the dark due to shame and/or fear.