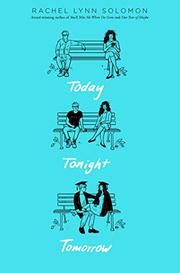 Rowan teams up with her academic nemesis to win a citywide scavenger hunt.

Rowan Roth and Neil McNair have been rivals in a never-ending game of one-upmanship since freshman year. Now, on the last day of senior year, Rowan hopes to best Neil once and for all as valedictorian, then win Howl, a scavenger hunt with a $5,000 cash prize. She also hopes to sneak away to her favorite romance author’s book signing; no one’s ever respected her passion for the genre, not even her children’s book author/illustrator parents. But Rowan’s named salutatorian, and vengeful classmates plot to end her and Neil’s reign. At first their partnership is purely strategic, but as the pair traverse the city, they begin to open up. Rowan learns that Neil is Jewish too and can relate to both significant cultural touchstones and experiences of casual anti-Semitism. As much as Rowan tries to deny it, real feelings begin to bloom. Set against a lovingly evoked Seattle backdrop, Rowan and Neil’s relationship develops in an absorbing slow burn, with clever banter and the delicious tension of first love. Issues of class, anti-Semitism, and sex are discussed frankly. Readers will emerge just as obsessed with this love story as Rowan is with her beloved romance novels. Rowan’s mother is Russian Jewish and Mexican, and her father is American Jewish and presumably White; most other characters are White.