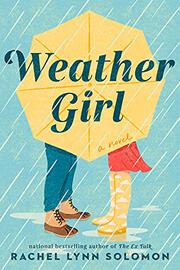 Co-workers scheme to get their bosses back together, falling for each other in the process.

Ari Abrams dreamed of being a meteorologist as a child, when she escaped from her mother’s stormy moods by watching Torrance Hale deliver the forecast on the evening news. Now 27, Ari covers the weather for local Seattle station KSEA 6, a dream come true. Having Torrance as her boss? The icing on the cake. At least, she thought it would be when she started the job three years ago. But KSEA 6 director Seth Hasegawa Hale is Torrance's ex-husband, and the two of them are at each other’s throats so often that it's made the atmosphere at the station perpetually overcast, leaving Torrance far too distracted to spend much time mentoring Ari. After Torrance and Seth cause a particularly dramatic scene at the station’s holiday party, Ari and sports reporter Russell Barringer bond over booze and their shared desire for better working conditions. They hatch a plan to turn their bosses’ passion from hate back to love through forced proximity—couples’ massages, dance classes, dinners—and in the process find their own friendship becoming much more. But Ari’s desire to keep her depression diagnosis hidden, along with Russell’s complicated home life, might put the kibosh on their burgeoning romance. The relationship between Ari and Russell is the main driver of the plot, but their connection is slightly underdeveloped. Their three years as co-workers are mostly unexplored, so the journey from friends to crushes to lovers feels rushed. But with a cast of interesting characters, sensitively explored topics of mental health and family dynamics, and enough steamy scenes to fog up the Seattle skyline, readers will no doubt be satisfied.

The forecast predicts a 100% chance of heartfelt rom-com charm.