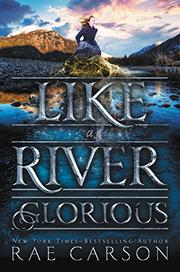 Young, white Leah Westfall’s mystical ability to sense when gold is near is both a beneficial and a dangerous trait during this era of the forty-niners. She is traveling through California with a band of friends who are looking to prospect and settle. Knowing her uncle Hiram—her only living relative, who knows of her power—is on her trail, Leah is forced to reveal her secret to her friends so that they know the risk of accompanying her. Utilizing Leah’s gold sense, this small group begins to stake their claims along the American River when uncle Hiram's men find her. The construct of this historical narrative fails by creating a female protagonist with absurd mystical powers that make her a cash cow (literally). The relationships are muddled, as she has a half-white, half-Cherokee sweetheart, Jefferson Kingfisher, a fact that is hard to reconcile with their prospecting on Indian land. Aside from Jefferson, the Native Americans mostly act as the stereotypical backdrop of decimated Indians. By keeping them largely naked and hidden, Carson diminishes the historical Native American resistance against Western expansion in the Sacramento area, and she adds insult to injury by ultimately making them collaborators in Leah’s theft of their land. An author’s note describes Carson’s research but cannot account for this portrayal.

Another indulgence in a Western narrative that undermines both history and its female protagonist instead of enlightening.