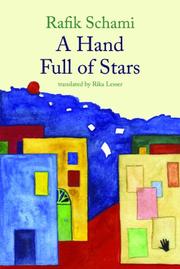 A HAND FULL OF STARS

First published in 1987 in Germany (where Schami now lives), an award-winning novel in the form of the journal of an unnamed boy growing up in Schami's native Damascus.

In brief incidents, directly told, the narrator grows from a schoolboy of 14 to a promising journalistic rebel three years later. Compelled to leave the school he loves (despite the varying competence of its teachers) and to do a man's grueling work in his father's bakery, the boy never gives up his dream of becoming a journalist. Eventually, he is able to change jobs and work for a bookstore; meanwhile, his first poems have been published in a collection of student work and he and his friends have needled their vicious police state with several acts, culminating in an underground newspaper distributed as stuffing in socks sold in the marketplace. In a country where violent changes of government are almost as commonplace as capricious arrests (both the boy's father and his mentor, a journalist who gives up his career in despair, are imprisoned and tortured without cause), hope survives in the talented young people here and in the adults who are wonderfully characterized in revealing incidents—especially the boy's wise, sensible mother and his close friend, an illiterate old man whose splendid stories illuminate many a circumstance.

A crystalline window into the many-faceted world of the Middle East. (Fiction. 12-16)