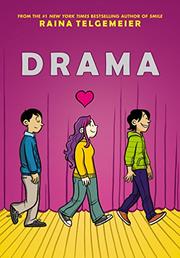 From award winner Telgemeier (Smile, 2010), a pitch-perfect graphic novel portrayal of a middle school musical, adroitly capturing the drama both on and offstage.

Seventh-grader Callie Marin is over-the-moon to be on stage crew again this year for Eucalyptus Middle School’s production of Moon over Mississippi. Callie's just getting over popular baseball jock and eighth-grader Greg, who crushed her when he left Callie to return to his girlfriend, Bonnie, the stuck-up star of the play. Callie's healing heart is quickly captured by Justin and Jesse Mendocino, the two very cute twins who are working on the play with her. Equally determined to make the best sets possible with a shoestring budget and to get one of the Mendocino boys to notice her, the immensely likable Callie will find this to be an extremely drama-filled experience indeed. The palpably engaging and whip-smart characterization ensures that the charisma and camaraderie run high among those working on the production. When Greg snubs Callie in the halls and misses her reference to Guys and Dolls, one of her friends assuredly tells her, "Don't worry, Cal. We’re the cool kids….He's the dork." With the clear, stylish art, the strongly appealing characters and just the right pinch of drama, this book will undoubtedly make readers stand up and cheer.