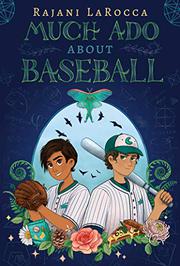 MUCH ADO ABOUT BASEBALL

A middle schooler struggles to adjust after moving to an idyllic Massachusetts town.

Trish Das is at a crossroads. Not only is the 12-year-old unhappy that her family has moved yet again due to her mother’s cardiology career, she also has to try out for a new baseball team. The fact that one of her new teammates is a former archrival further complicates matters. Math prodigy Ben Messina went head-to-head against fellow math whiz Trish at last spring’s Math Puzzlers Championship. When Trish emerged victorious, Ben was stunned. The two get closer when the team’s mysterious pregame snacks start making everyone play better while also causing magical side effects during games. Equally surprising are the cryptic puzzle booklets Trish and Ben receive in the mail that lead them to even more wins. But as the puzzles get harder to solve, the risk of failing to do so increases. Alternating between Trish’s and Ben’s perspectives, LaRocca’s novel—a companion to 2019’s Midsummer’s Mayhem—is a Much Ado About Nothing homage that explores parental expectations, complicated friendships, and teamwork. The protagonists’ love of problem-solving shines through, and the puzzles themselves are clearly explained. As a third-generation Indian American, Trish also has moving conversations about the circumstances that led her grandparents to emigrate and how those decisions still impact their lives. Ben is implied White. Final illustrations not seen.

A moving tale of baseball, magic, and former rivals who come together to solve a problem.