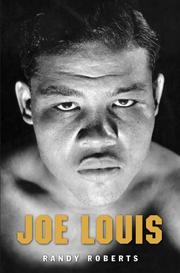 A sympathetic, moving life of the Brown Bomber by veteran cultural historian and biographer Roberts (History/Purdue Univ.; The Rock, the Curse, and the Hub: A Random History of Boston Sports, 2005, etc.).

As the author tells it, the story of Joseph Louis Barrow (1914–1981) is humbling, inspiring, depressing and deeply emotional. Born into a laboring family in rural Alabama, Louis, the seventh of eight children, showed no particular aptitude for much of anything. When his father’s mental illness consumed him, Louis’s mother remarried, and Joe eventually discovered the boxing world, where he began using Louis for a surname and discovered—after some shocks, disappointments and hard knocks—that he had the ability to be something special. And he was. As Roberts shows, America was a vilely racist society, both in the Jim Crow South and in the North. Louis, groomed by his handlers to be the laconic antithesis to the flamboyant Jack Johnson, still had the burden of an Atlas on his shoulders—the burden of the American black world, whose population grew to revere him and anoint him their avatar, their warrior who defeated, one after another, the representatives of oppressive white America. As war with Germany loomed, Louis came to represent America itself in his second fight (he’d lost the first) with the German Max Schmeling, who cavorted with Nazis and hung with Hitler. Roberts handles the boxing action with professional aplomb, and he knows when to cut away to tell us something of consequence and when to return to the ring. The author ably chronicles Louis’s rise from Alabama cotton fields to the cavernous Yankee Stadium, where celebrities glittered in the ringside seats for his big fights; the development of the mass media (boxing was enormously popular on radio); Louis’s career in the U.S. Army; and his sad decline, amid unpayable debts and mental illness.

All legendary athletes should hope for treatment by such capable, compassionate hands.