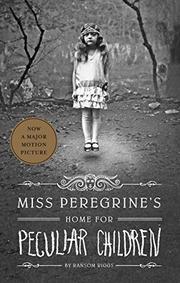 From the Peculiar Children series, volume 1

Riggs spins a gothic tale of strangely gifted children and the monsters that pursue them from a set of eerie, old trick photographs.

The brutal murder of his grandfather and a glimpse of a man with a mouth full of tentacles prompts months of nightmares and psychotherapy for 15-year-old Jacob, followed by a visit to a remote Welsh island where, his grandfather had always claimed, there lived children who could fly, lift boulders and display like weird abilities. The stories turn out to be true—but Jacob discovers that he has unwittingly exposed the sheltered “peculiar spirits” (of which he turns out to be one) and their werefalcon protector to a murderous hollowgast and its shape-changing servant wight. The interspersed photographs—gathered at flea markets and from collectors—nearly all seem to have been created in the late 19th or early 20th centuries and generally feature stone-faced figures, mostly children, in inscrutable costumes and situations. They are seen floating in the air, posing with a disreputable-looking Santa, covered in bees, dressed in rags and kneeling on a bomb, among other surreal images. Though Jacob’s overdeveloped back story gives the tale a slow start, the pictures add an eldritch element from the early going, and along with creepy bad guys, the author tucks in suspenseful chases and splashes of gore as he goes. He also whirls a major storm, flying bullets and a time loop into a wild climax that leaves Jacob poised for the sequel.

A trilogy opener both rich and strange, if heavy at the front end.