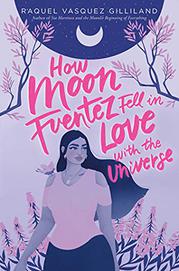 HOW MOON FUENTEZ FELL IN LOVE WITH THE UNIVERSE

Seventeen-year-old Moon Fuentez is used to being her stunning twin’s designated photographer and size-16 shadow as well as their cruel momager’s less-loved daughter. Two weeks after their high school graduation, Star, a religious model whose brand is purity, lands a lucrative gig for a summer charity tour arranged by Andro Philips, a sexy, young social media app founder. Moon is coerced into working the tour, earning money to help fulfill her dream of attending Tulane’s art program. Her partner at the merchandise table is enigmatic, gorgeous Santiago, Andro’s younger brother. After a disastrous first meeting, Moon and Santiago slowly get to know each other through bickering and banter. She’s a flower lover who’s designing a deck of tarot cards; he’s an incredible gourmet cook. Their initial animosity turns to attraction and affection in a simmering but steamy slow burn. As in her debut, the author’s prose is lush and lyrical, emphasizing the natural world and ancient spirituality. The story’s magical elements are integrated beautifully, as is the main characters’ Latinx heritage: The Fuentez sisters are Mexican American, and the Philips brothers have a Colombian mother and presumed White father. In addition to important sex-positive messages, the book sensitively explores grief, trauma, abuse, disability, and sisterhood as well as the negative impacts of homophobia and purity culture.

Readers will fall in love with this poignant, powerful, and poetic coming-of-age tale.