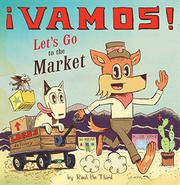 ¡VAMOS! LET'S GO TO THE MARKET

From the ¡Vamos! series

Little Lobo and his dog, Bernabé, journey through a Mexican mercado delivering diverse goods to a variety of booths.

With the aid of red words splattered throughout the spreads as labels, Raúl the Third gives an introduction to Spanish vocabulary as Little Lobo, an anthropomorphic wolf, leaves his house, fills his cart with objects from his warehouse, and delivers them to the market’s vendors. The journey also serves as a crash course in Mexican culture, as the images are packed with intertextual details such as food, traditional games, and characters, including Cantinflas, Frida Khalo, and Juan Gabriel. Readers acquainted with Raúl the Third’s characters from his Lowriders series with author Cathy Camper will appreciate cameos from familiar characters. As he makes his rounds, Little Lobo also collects different artifacts that people offer in exchange for his deliveries of shoe polish, clothespins, wood, tissue paper, paintbrushes, and a pair of golden laces. Although Raúl the Third departs from the ball-pen illustrations that he is known for, his depiction of creatures and critters peppering the borderland where his stories are set remains in his trademark style. The softer hues in the illustrations (chosen by colorist Bay) keep the busy compositions friendly, and the halftone patterns filling the illustrations create foregrounds and backgrounds reminiscent of Roy Lichtenstein’s pointillism.

A culturally intricate slice of a lupine courier’s life.