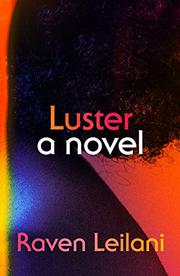 After losing her day job, a troubled young artist finds herself living with her much-older lover, his inscrutable wife, and their adopted daughter in Leilani’s electric debut.

Edie meets Eric online: She's a 23-year-old Black art school dropout with a mouse-infested apartment in Bushwick and an ill-fitting administrative job at a children’s publishing imprint; he's a White archivist in an open marriage and twice her age. “The age discrepancy doesn’t bother me,” she explains, keenly aware of the dynamics of these types of exchanges, his stability and experience for the redemptive power of her youth. Of course, she has been curious about the wife, but it's only after Eric goes silent that she wanders into his unlocked house and comes face to face with Rebecca, who knows who she is and coolly invites her to stay for dinner. Afterward, Rebecca leaves her a voicemail: “I enjoyed meeting you, let’s do that again.” And so it begins. Newly fired from the publishing house for being “sexually inappropriate,” Edie is working for a delivery app when she gets an order for lobster bisque and a bone saw delivered to a VA hospital. The customer is Rebecca. The bone saw is because she’s a medical examiner. The reason Rebecca then takes Edie home with her…can’t be reduced into straightforward facts. Edie’s role in their household is perpetually tenuous and always unspoken: It is clear to her that she has been brought in, in part, “on the absurd presumption” she’d know what to do with their traumatized daughter, Akila, “simply because we are both black.” So she bonds with Akila. Sometimes, she cleans. She is neither Rebecca’s friend nor her rival. Regular envelopes with money appear on her dresser in irregular amounts, a cross between an allowance and a paycheck. And all the while, the dynamics among the four of them keep shifting, an unstable ballet of race, sex, and power. Leilani’s characters act in ways that often defy explanation, and that is part of what makes them so alive and so mesmerizing: Whose behavior, in real life, can be reduced to simple cause and effect?