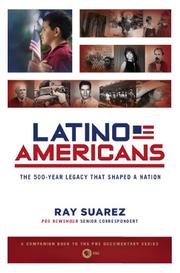 The 500-Year Legacy that Shaped a Nation

An earnest, informative companion to the PBS series on the largest and fastest-growing minority in the United States: Latinos, now numbering more than 50 million.

Journalist and PBS commentator Suarez (The Holy Vote: The Politics of Faith in America, 2006) notes that, among nations, only Mexico contains more Hispanics than the U.S. “At some point in the 2040s,” writes the author, “a slim majority of Americans will trace their ancestry to people who arrived in this country from someplace other than Europe.” Beginning in the 17th century, Suarez reminds readers that when Englishmen arrived at Massachusetts and Virginia to settle or look for riches while despoiling and killing Indians, Spaniards and colonists from Mexico had been doing the same for 50 years in Florida and the Southwest. After a review of Spanish New World exploration and capsule histories of Mexico, Cuba and Puerto Rico that emphasize their usually painful relations to the U.S., Suarez concentrates on America’s Latino legacy from the 19th century to the present. Two themes predominate: racism and immigration. Although not as murderous as that against blacks, discrimination against Latinos has an equally long and troubled history that turns out to be no less true for white America’s fear of being overwhelmed with Hispanics pouring across our border. True to TV documentary format, Suarez includes the story of an individual with every section. Few will be familiar, yet many should be—e.g., José Martí, the hero of Cuban independence, or Juan de Oñate, founder of the first white settlement in the Southwest. Matters improve greatly as the author approaches the present day and points with pride to famous Latinos from Desi Arnez to Albert Pujols.