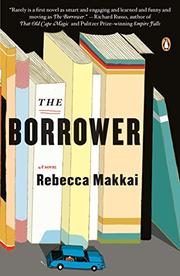 A children’s librarian in Hannibal, Mo., finds herself on a long, strange trip in Makkai’s ruminative first novel.

Lucy Hull feels sorry for Ian Drake, the most devoted attendee of her read-aloud on Friday afternoons. Ian’s reading is severely circumscribed by his mother’s fundamentalist strictures, which rule out everything from Roald Dahl to Harry Potter. Lucy is further appalled when she learns that Ian—whom everyone assumes is gay, though he’s only 10—is forced to attend weekly classes with Pastor Bob, who specializes in rehabilitating “sexually confused brothers and sisters in Christ.” So when Lucy finds Ian hiding in the library one morning with a knapsack, she decides to help him run away. They wind up on a meandering journey that passes through her parents’ home in Chicago, where Lucy picks up some cash from her father, an affluent Russian immigrant with vaguely unsavory business ties. En route to Vermont, where Ian claims his grandmother lives, Lucy tries to figure out how she got herself into this mess and how she can avoid being arrested as a kidnapper. Makkai takes several risks in her sharp, often witty text, replete with echoes of children’s classics from Goodnight Moon to The Wonderful Wizard of Oz, as well as more ominous references to Lolita. Lucy and Ian don’t bond in the warm and fuzzy way of Hollywood movies, and there’s no big payoff where he recognizes and renounces his mother’s bigoted ways. He remains a smart, difficult kid whose inner thoughts are opaque. This is Lucy’s story, and we have known from the opening pages that her road trip will shake her loose from Hannibal; the interest comes from discovering how and why. The novel bogs down for a long time in the middle with an excess of plot, but the moving final chapters affirm the power of books to change people’s lives even as they acknowledge the unbreakable bonds of home and family.