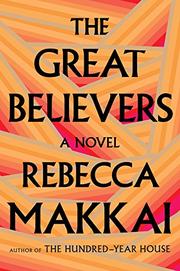 Another ambitious change of pace for the versatile and accomplished Makkai (The Hundred-Year House, 2014, etc.), whose characters wrangle with the devastating impact of the AIDS epidemic at its height and in its aftermath.

In the first of two intertwined storylines, Yale and his live-in lover, Charlie, attend an unofficial wake for a dead friend, Nico, held simultaneously with his funeral service because his Cuban-American family has made it clear they don’t want any gay people there. It’s 1985, and Makkai stingingly re-creates the atmosphere of fear, prejudice, and sanctimonious finger-pointing surrounding the mortally afflicted gay community, even in a big city like Chicago. Nico’s younger sister, Fiona, has rejected their family and attached herself to his friends, with emotional consequences that become apparent in the second storyline, set 30 years later in Paris. As is often the case with paired stories, one of them initially seems more compelling, in this case Makkai’s vivid chronicle of Yale’s close-knit circle, of his fraught relationship with the obsessively jealous Charlie, and his pursuit of a potentially career-making donation for the university art gallery where he works in development. Fiona’s opaque feelings of guilt and regret as she searches for her estranged daughter, Claire, aren’t as engaging at first, but the 2015 narrative slowly unfolds to connect with the ordeals of Yale and his friends until we see that Fiona too is a traumatized survivor of the epidemic, bereft of her brother and so many other people she loved, to her lasting damage. As Makkai acknowledges in an author’s note, when a heterosexual woman writes a novel about AIDS, some may feel she has crossed “the line between allyship and appropriation.” On the contrary, her rich portraits of an array of big personalities and her affecting depiction of random, horrific death faced with varying degrees of gallantry make this tender, keening novel an impressive act of imaginative empathy.

As compulsively readable as it is thoughtful and moving: an unbeatable fictional combination.