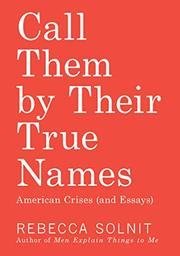 CALL THEM BY THEIR TRUE NAMES

For those heartsick at Trumpism, essayist and Harper’s contributing editor Solnit (The Mother of All Questions, 2017, etc.) offers context and support. Optimism? You’re on your own.

As the author argues in this fiery clutch of essays, optimism isn’t a particularly helpful attitude anyway. Optimism—and its obverse, pessimism—are “false certainties” that “let us stay home and do nothing” in response to hard-line, bigoted conservatism. It is better, she argues, to cultivate hope, “an informed, astute open-mindedness.” That’s a thesis Solnit has explored often, particularly in her 2009 book on Hurricane Katrina and other tragedies, A Paradise Built in Hell, and she’s persuasive at marshaling a case for the long view while being cleareyed about the degradations of the moment. The 1916 Irish rebellion against the British, for instance, paved the way to independence two decades later, and years of steady pressure led to the removal of Confederate statues in New Orleans in 2017. So don’t despair: “We don’t know what will happen next and have to live on principles, hunches, and lessons from history.” Which is why the author doesn’t mind the criticism that liberal pundits like her are preaching to the choir by reasserting principles and history lessons: The choir represents the “deeply committed” who need encouragement. Stoking that support in part demands attacking doublespeak that enables bigotry and unethical behavior from governments. She explores this most effectively in “Death by Gentrification,” an investigation of the shooting of a San Francisco man by police and the rhetorical pretzels police used to blame the victim. Telling the story wrong, with the wrong words and framing, threatens democracy, she exhorts journalism school graduates in one essay. Her own work is a model of doing it right.

Solnit is careful with her words (she always is) but never so much that she mutes the infuriated spirit that drives these essays.