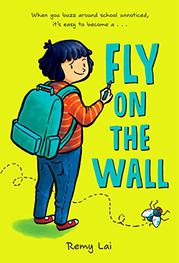 FLY ON THE WALL

Some things you must learn on your own.

In this graphic/prose hybrid, Henry Khoo embarks on a secret mission. Now that he’s 12, the legal age to travel alone, he has plans to fly from his Australian home to Singapore, where his father lives. As he haphazardly navigates his way to his flight, his tangled motivations slowly unfold. Initially it appears he wants to establish his independence, seeking reprieve from the overbearing eyes of older sister Jie, Mama, and wuxia drama–watching Popo. Soon the comedic narration reveals that Henry is confronting myriad issues: his emotionally and geographically distant father; his waning relationship with his best friend; and his need to hide his secret identity as the creator of the Fly on the Wall website. Spawned from Henry’s sense that he’s invisible to all, his online comics illustrate school gossip—and draw the opprobrium of the school administration. As in Lai’s debut, Pie in the Sky (2019), humorous line drawings punctuate the text and reveal Henry’s inner feelings. Flashbacks deftly illuminate Henry’s emotional journey to a wider worldview and eventual ownership of his feelings. Lai has a talent of not preaching to her readers, instead offering the reassurance that no one is alone in experiencing the painful awkwardness and occasionally harsh realities of growing up. Henry and his family are Chinese, and dialogue is occasionally bilingual.

This thrilling coming-of-age adventure is both quirky and sincere.