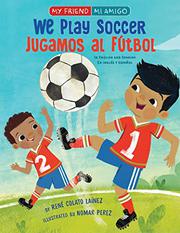 On a beautiful sunny day, two young boys experience the twists and turns of a soccer game.

Joe warmly greets José as he walks onto the soccer field. They eagerly show off their red uniforms and cleats, then practice keep-ups, juggling soccer balls on their knees. Their enthusiasm is palpable, but when the match begins, they aren’t chosen as starting players. A female coach benches the boys, and though they’re sad at first, the game soon absorbs their attention as they cheer on their teammates. Only when it begins to look like their team might lose are they called onto the field, much to their delight, and the match draws to an exciting conclusion. The story is told entirely through the boys’ dialogue, which appears in speech bubbles. Joe speaks exclusively in English and José, exclusively in Spanish. It’s not clear whether the boys can also speak each other’s languages, and poignantly, it doesn’t matter. The kids clearly understand each other, using body language and context to bolster verbal communication. The bilingual sentence repetition (“I pass the ball to José / Goal! / ¡Gol! / Le paso la pelota a Joe”) creates a realistic and seamless narrative that young children can easily follow while developing both English and Spanish skills. The illustrations are vibrant, and characters are depicted as having various shades of light brown skin. Backmatter helpfully provides direct translations of words that appear in the story.

A bright, sweet story about friendship, teamwork, and the joy of soccer.