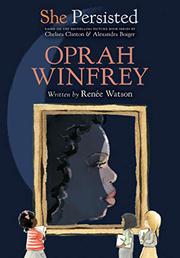 From the She Persisted series

In this series of chapter-book biographies, the common theme is persistence, and that word certainly applies to Oprah Winfrey.

Born to a single mother in Kosciusko, Mississippi, during the Jim Crow era, Oprah was raised by her grandparents on their farm. Once she started school, it was obvious she was bright. However, Oprah’s life was unsettled, as she moved to Wisconsin to join her mother, then two years later to Tennessee to live with her father. Her father was strict about school and church attendance, two areas that gave Oprah opportunities to excel. Her love of reading was noticed, and she was recommended for the Upward Bound program and a rigorous high school. Nevertheless, she struggled with her behavior. During those tumultuous years, Oprah discovered the writings of poet Maya Angelou, and they helped her settle in to schoolwork and speech tournaments. That led to her getting an after-school job at a radio station, then a TV station during college. A move to a Baltimore station led to her success in the interview format and ultimately The Oprah Winfrey Show and international fame. This is a lively introduction to the life of a woman who beat many odds to become successful. Award-winning author Watson describes Oprah’s triumphs as well as her difficulties, including sexual abuse, in age-appropriate prose. Young readers who know only the accomplished philanthropist will take inspiration from knowing of her beginnings. Flint’s black-and-white illustrations enhance the text.

A highly recommended addition to this stellar series.