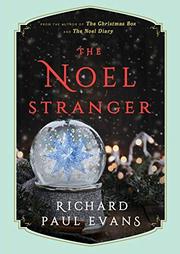 Barely recovering from her now ex-husband’s arrest for bigamy, Maggie decides to buy a Christmas tree to cheer herself up and winds up meeting the sweet, sexy lot owner who sweeps her off her feet. Until she discovers he has a few dark secrets of his own.

Maggie is a Salt Lake City caterer who retreated from life after her husband was arrested for bigamy. Her friend Carina, who has taken over day-to-day operations for the company, encourages her to get out more or at least bring some life into her home. For instance, through a Christmas tree. When Maggie visits a local tree lot, she is immediately attracted to the owner, Andrew. The two become an item very quickly; he invites her to Mexico, they have an amazing time, they come back. Carina has Googled him. There are Things. To. Be. Concerned. About. Maggie abandons him. She reconsiders. He tells her the truth, then decides she’s too good for him and abandons her. People who love them intervene and try to save their romance. An aside: Maggie’s real name is Agnetha—after the woman in ABBA. Growing up in Oregon, her friends called her Aggie, but in Utah, she changed it to Maggie, since the Utah state university teams are called the Aggies and the name became tiresome. Does this aside sound random? Does the review sound a little choppy and simplistic? There’s a reason. While the book has witty and interesting moments, it reads at times like an encyclopedia of interesting facts (who knew a squid was so terrifying?) and at times like a travel site (readers will want to jump a flight to Cabo), and while we root for Andrew and Maggie, in the end, readers might also wonder lots of things, such as how Maggie wouldn’t have Googled Andrew herself, given all the mysterious clues he drops and her own vulnerabilities; or why Andrew never tells her the truth until he’s decided to abandon her; etc.

Oddly interesting but unsatisfying, especially if one thinks about it too much.