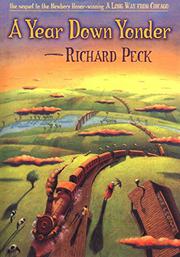 A YEAR DOWN YONDER

From the Grandma Dowdel series, volume 2

Set in 1937 during the so-called “Roosevelt recession,” tight times compel Mary Alice, a Chicago girl, to move in with her grandmother, who lives in a tiny Illinois town so behind the times that it doesn’t “even have a picture show.”

This winning sequel takes place several years after A Long Way From Chicago (1998) leaves off, once again introducing the reader to Mary Alice, now 15, and her Grandma Dowdel, an indomitable, idiosyncratic woman who despite her hard-as-nails exterior is able to see her granddaughter with “eyes in the back of her heart.” Peck’s slice-of-life novel doesn’t have much in the way of a sustained plot; it could almost be a series of short stories strung together, but the narrative never flags, and the book, populated with distinctive, soulful characters who run the gamut from crazy to conventional, holds the reader’s interest throughout. And the vignettes, some involving a persnickety Grandma acting nasty while accomplishing a kindness, others in which she deflates an overblown ego or deals with a petty rivalry, are original and wildly funny. The arena may be a small hick town, but the battle for domination over that tiny turf is fierce, and Grandma Dowdel is a canny player for whom losing isn’t an option. The first-person narration is infused with rich, colorful language—“She was skinnier than a toothpick with termites”—and Mary Alice’s shrewd, prickly observations: “Anybody who thinks small towns are friendlier than big cities lives in a big city.”