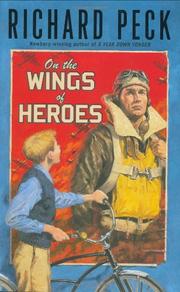 ON THE WINGS OF HEROES

It always seemed to be summer in Davy Bowman’s Illinois town; his street was his world. In epic games of hide-and-seek, Davy would ride toward home base on brother Bill’s shoulders or in the crook of his father’s good arm. And every Halloween, Earl Bowman, in Grandma Dowdel–like fashion, exacted revenge on neighborhood bullies. Early episodes give way to rich stories—poignant and humorous—about the weight of war as it wrapped around the shoulders of the Bowmans. It was “the duration,” not really real life, just waiting for Bill to return from his B-17 missions over Germany. In the meantime, Davy and his friend Scooter gather scrap metal, newspapers and milkweed for the war effort, the Chicago mob attacks Mr. Bowman and ancient Eulalia Titus teaches Davy’s class with a firm hand (and strategically placed rattraps). Peck’s skill at characterization is unsurpassed; Earl Bowman is as memorable as any previous character. Scenes are so well crafted they beg to be read aloud. An ode to a father, a big brother and an era captured by a writer at his peak. (Fiction. 10+)