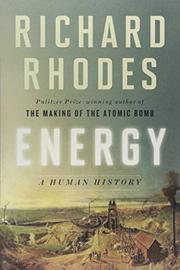 From the Pulitzer and National Book Award winner, a magisterial history of “how human beings…[have] confronted the deeply human problem of how to draw life from the raw materials of the world.”

The modern world consumes gargantuan quantities of energy, a process made possible by the Industrial Revolution that began 300 years ago. In his latest, prolific veteran journalist and historian Rhodes (Hell and Good Company: The Spanish Civil War and the World it Made, 2015, etc.) casts his expert eye on the subject. The breakout century for energy was the 18th, its birthplace Britain, and its basis coal, a more concentrated source of power than wood, increasingly cheap, and—no secret at the time—a source of smoke far more irritating than that of wood. Energy’s breakout technology was the steam engine. After the traditional nod to the Greeks, the author delivers a lucid but not dumbed-down explanation of how it works, from the first, clunky Newcomen engine suitable only for raising water from mines to James Watt’s spectacular improvements, which made steam engines the dominant power source until around 1900, when the steam turbine, electric motor, and internal combustion engine took over. Invention accelerated after 1800 when Watt’s patents (ironically a drag on progress) expired, and Rhodes takes readers on an exhilarating ride through the following two centuries, mixing narratives about the new sources of energy (electricity, oil, natural gas, the sun, and the atom) and the marvels that they made possible. He devotes entire chapters to their downsides (smog, radiation, toxic waste) but shows little sympathy for anti-technology activists. Humans are problem-solvers, he maintains, and the same genius that produced technological wonders will solve the problems that accompany them—although his optimism flags in the face of global warming.

Calling this a classic like Rhodes’ The Making of the Atomic Bomb (1987) may be slightly premature, but it’s definitely a tour de force of popular science, which is no surprise from this author.