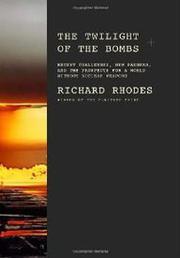 THE TWILIGHT OF THE BOMBS

Recent Challenges, New Dangers, and the Prospects for a World Without Nuclear Weapons

The foremost historian of the birth, growth and spread of nuclear weapons examines developments in the post–Cold War era.

Since the publication of The Making of the Atomic Bomb (1987), which won nearly every major book award, Rhodes (Arsenals of Folly: The Making of the Nuclear Arms Race, 2007, etc.) has owned the story of nuclear weapons. If this concluding volume in his nuclear history is slightly less impressive than its predecessors, it may only be that we’re still too close to the events for any observer, even one as informed and eloquent as the author, to finally judge all that has unfolded during the past two decades. A series of set-pieces brings the story up to date—South Africa’s pursuit and eventual dismantling of its nuclear arsenal, the Clinton administration’s negotiations with North Korea to dismantle its nuclear program and the arms race between Pakistan and India. Rhodes devotes the bulk of the narrative, however, to two stories: Iraq’s secret bomb program under Saddam Hussein—and the costly miscalculations that led to the second Gulf War—and the era’s signature event, the collapse of the Soviet Union and the mostly successful attempt to secure the Soviet nuclear arsenal as republics within the old empire declared independence. The author approvingly quotes an expert who calls the removal of nuclear weapons from Belarus, Ukraine and Kazakhstan “the single most important accomplishment of the 1990s.” Although Rhodes includes a section on the frightening potential for nuclear terrorism, he delivers a surprisingly upbeat verdict on the future, noting that “more nations gave up their nuclear ambitions during the 1990s than sought to acquire those weapons of terror and mass death,” and predicting that within his grandchildren’s lifetimes “possession of a nuclear weapon will be judged a crime against humanity.”

A skillful assessment of the transformation of nuclear weapons from the so-called guardians of our security during the Cold War to the burden and catastrophic threat they pose today.