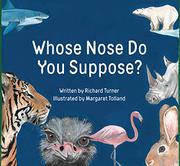 WHOSE NOSE DO YOU SUPPOSE?

Twelve different animal noses lead to 12 short, versified identifications of each animal and a few facts about it.

Two gray, furry legs with long, dark claws reach into a stretch of stark white space on the first verso. On the recto is an enormous, realistically portrayed black nose protruding from a white, whiskered, foreshortened snout. A pink tongue and the bottoms of dark eyes are also visible. A strip of white frame underneath sports the boldly lettered question of the title. The next page shows a group of meerkats standing upright in an ochre desert. The text shows the animal name and then resorts to rhyming couplets to explain: “In faraway Africa, you will find this nose / where it’s dusty and dry and not much grows.” A few more lines describe the meerkat’s claws, burrow, and speed, with stumbling syllabic emphases (“marvelous eyesight” rhymes with “the cold desert night”). The layout, painterly artwork, and repeated litany of the title line work beautifully together throughout. The attempted poetry is a detractor, twice exoticizing Africa, sometimes substituting banality for facts to create a couplet, and sometimes resorting to absurdly stretched near rhymes. Readers will find themselves wishing Turner had chosen to write this in straight text. The idea is an original way to introduce the youngest children to different kinds of animals, and preschoolers will enjoy the interaction of guessing each animal before the turn of the page.

Nosy fun conveyed in verse that can induce wincing.