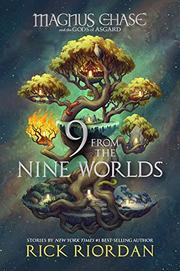 9 FROM THE NINE WORLDS

From the Magnus Chase and the Gods of Asgard series

Thor thunders through the nine worlds, listening to rock music (“Rock, rock. Rock-rock-rock,” he chants) and traumatizing all he passes with his tiny leather jogging shorts. Meanwhile, beloved characters from the Magnus Chase books all get chances to shine, using their skills and personalities to complete a variety of miniature quests. Blitzen the dapper dwarf turns an enemy dwarf into stone. Samirah the Valkyrie heroically takes a picture of an egg. Einherji Mallory teaches the dragon Nidhogg to tell jokes. And as readers have grown to expect from Riordan’s series, the intersecting identities of each character play a variety of roles in their adventures. Samirah uses her magical hijab as a harness. Alex’s gender shifts multiple times in the stories, with his and her friends greeting it with aplomb. One episode that stretches credibility in this regard focuses on the deaf elf Hearthstone, who somehow manages to accurately lip-read lengthy, complex sentences (including the name Siersgrunnr) from a troll who has his face covered by a “tinted plastic shield,” the only significant area where Riordan stumbles in depicting marginalized identities. Otherwise, these stories are funny, exciting side quests centering on Hotel Valhalla, with Magnus graciously sharing the spotlight. Full-page illustrations contributed by James Firnhaber, Jim Madsen, and Yori Elita Narpati sound decorative grace notes.

Bite-sized adventures for readers who want to linger in Magnus Chase’s world.