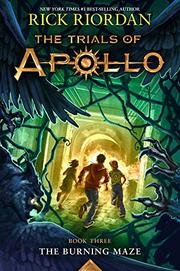 From the Trials of Apollo series, volume 3

Apollo’s mortifying punishment continues as he battles a notorious historical villain while in pursuit of an Oracle.

Apollo (still trapped in the body of a teenage boy) finds his way out of a terrifying underground labyrinth with his demigod master, green-thumbed Meg McCaffrey (she’s a daughter of Demeter), only to find himself in a tense Southern California desertscape. The state has been plagued with droughts and wildfires, and climate change isn’t the only thing to blame. As in most of Riordan’s mythology novels, Apollo and his friends must fight their way through a variety of challenges, meeting gods, monsters, and spirits along the way. In this installment the main allies are dryads, a welcome spot of green in the desert. Caligula (“Little Boots”) is a mastermind of unparalleled sadism. The captive Oracle Herophile contrasts effectively with the power and determination of Medea. “Power,” Apollo muses, “makes good people uneasy rather than joyful or boastful. That’s why good people so rarely rise to power.” He continues to grow as a sympathetic narrator, his egotism and vanity slowly giving way to humility and self-sacrifice. His flashes of vulnerability, especially around the reminder of his long-departed lover Hyacinthus, are endearing—but the constant deprecating references to his “flabby” and “softly curved…in all the wrong ways” reinforce tiresome body-image assumptions. The book assumes a white default, though some secondary characters are not white.

A satisfying bridge, setting up for the next in the series